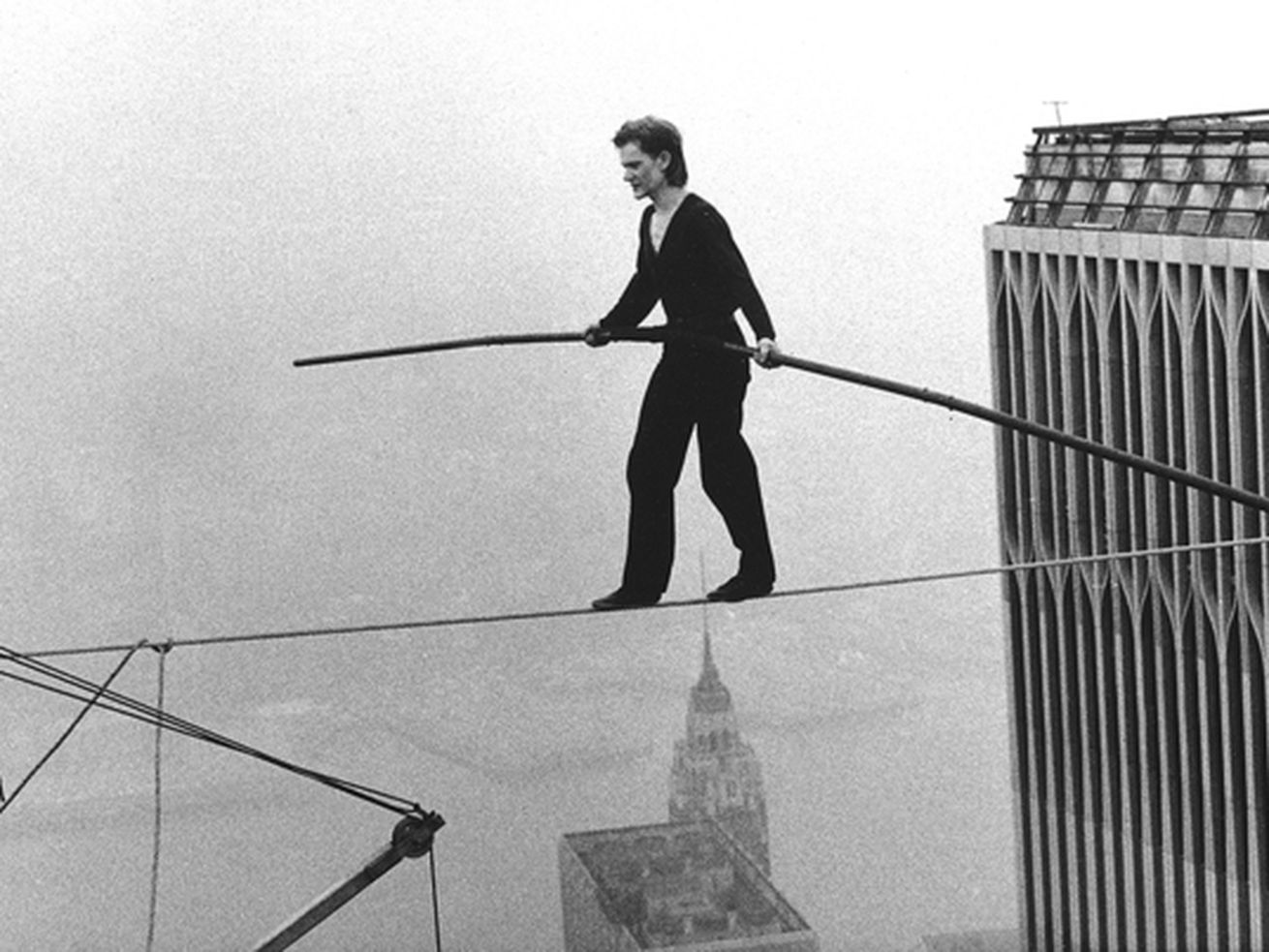 On Wednesday, August 7, 1974, people in Lower Manhattan stopped in their tracks to watch a strange event in the sky—not a bird, not a plane, and certainly not Superman. The hullabaloo was over a Frenchman named Philippe Petit, who was walking on a high wire more than 1,300 feet in the air, suspended between the tops of the Twin Towers of the old World Trade Center.

In 2015, filmmaker Robert Zemeckis honored the feat in a film called The Walk, starring Joseph Gordon-Levitt as Petit. (Check out Vox’s review, which says it’ll give you “dizzying vertigo.”) So how does the Hollywood depiction compare to the real-life events? (Warning: spoilers up ahead.)

First things first: The Walk isn’t the first film about Philippe Petit’s “coup,” as he called it. The 2008 documentary Man on Wire, directed by James Marsh, won the Academy Award for his retelling of the day’s events. (The title, it turns out, came from three words found on the police report.) The film was a beautiful love letter to the Twin Towers, featuring interviews with Petit and his accomplices, and aerial footage of pre-9/11 New York City.

Because of that film, some wondered if Zemeckis’s dramatization was even necessary, or if it could hold its own. But here’s a fun fact: The idea for The Walk was actually conceived before Man on Wire was released.

The backstory for Petit’s infamous walk is this: He was a French street performer prior to the daredevil act. One day, years before it was executed, he had a dental emergency and saw a rendering of the Twin Towers (pre-construction) in a newspaper in the waiting room, prompting his dream to one day walk between the two. He described that day in Man on Wire:

My story is a fairy tale. Here I am, young, 17-years-old, with a bad tooth in one of those uncolorful waiting room of a French dentist.…[A]nd, suddenly, I freeze because I have opened a newspaper at a page and I see something magnificent, something that inspires me. I see two towers and the article says one day those towers will be built. They’re not even there yet. And when they are, they will become the highest in the world. Now, I need to have that, this little tangible start of my dream, but everybody’s watching, but I need that page. And so what I do is under the cover of sneeze, I tear a page, put it under my jacket, and go out. Now, of course I would have a toothache for a week. But what’s the pain in comparison that now I have acquired my dream?

In the interim, he trained with Czech circus performer Rudy Omankowsky (portrayed in The Walk by Sir Ben Kingsley). Petit walked between the towers of Notre Dame in 1971, and in 1973, he walked between two of the pylons of the Sydney Harbour Bridge. Like his permit-less street performances, these two acts were also illegal. But they were important stepping stones on his way to the World Trade Center. “I started, as a young, self-taught wirewalker, to dream of not so much conquering the universe, but, as a poet, conquering beautiful stages,” Petit said in an interview for Man on Wire.

When Petit first arrived at the Twin Towers, seeing them nearly crushed his dream, as he recalled:

[T]he minute I got out of the subway, climbing the steps, looking at them, I knew that they were no dream. I knew that my dream was destroyed instantly… Impossible, impossible, impossible. It’s clearly impossible, not only to walk across, this I probably hardly thought of it. But to bring almost like a ton of equipment, secretly, to rig a wire for hours, to guideline it. It’s clearly out of human scale, but something in me pulls me toward touching it.

Petit started scouting the buildings, realizing the ways he could actually penetrate the site, disguising himself as everything from a tourist to a construction worker to an architect to a journalist. At one point during his scouting, the entire enterprise nearly came falling down when Petit accidentally stepped on a nail, seriously injuring his foot. The injury was actually a blessing, as people surrounding the site weren’t as adamant about interrogating a man on crutches.

While scouting one day, Petit encountered a man named Barry Greenhouse, who worked for the New York State Insurance Department on the south tower’s 82nd floor. Greenhouse knew Petit didn’t belong there—he knew who Petit was after seeing him perform in Paris. In Greenhouse, Petit had found his inside man. Petit’s team would come to consist of members from France, the United States, and even an Australian (who went with Petit in a helicopter to scout the site from above). Not all of them are depicted in The Walk, but the story remains unscathed other than the real-life decision not to carry the performance out in May, but in August.

Two teams, one of which was led by Petit, began setting up for the walk on August 6. One made its way to the top of the north tower with some of the equipment (including an intercom) and a bow with an arrow attached to a fishing line. Meanwhile, Petit’s team was to bring the bulk of the equipment (including the high wire itself) up to Greenhouse’s office and then walk it up to the roof. In a stroke of luck, the freight elevator operator didn’t hear his boss’s instructions clearly and they were able to go way higher than the 82nd floor—in real life, the 104th floor, but in the film, the team goes straight to 110.

Hearing a guard approach, one of Petit’s team members freaked out (recalling the event, the man was pretty sure he was high) and abandoned the remaining two members. Those two hid under a tarp for hours—Petit eventually used a paper clip to create a hole in the tarp and widened it with a pen to watch and see if the guard had gone.

Petit eventually reached the roof, but realized at the time that he couldn’t find his arrow. After a prolonged search—that included him stripping to see if it was on his body somewhere—Petit found it on a corner of the building. He climbed down and got it, attaching gradually heavier and heavier rope and cable until the high wire was strung between the two buildings. Also attached were two stabilizing cables, which were placed horizontal and perpendicular to the high wire itself. At one point, a piece of Petit’s costume fell to the ground, briefly sending team members watching from there into a panic.

Petit wanted to be out on the wire by 6 a.m., before construction workers would arrive, but ran behind schedule. It wouldn’t matter: In a span of 45 minutes, he crossed between the towers eight times. He became so comfortable in the act that he got down on one knee and laid down on the cable.

Petit and his accomplices were arrested, but a judge told Petit the charges would be dismissed if he performed for children in Central Park—a request the Frenchman was happy to comply with.

Petit’s love affair with New York continued: He did a wire walk at Lincoln Center, and was given a lifetime pass to the original World Trade Center observatory. He is now artist-in-residence at the Church of St. John the Divine and lives in the Catskills.

Petit’s walk remains one of the most fabled, and stunning, acts of public art in New York City. “There is no why,” he said in Man on Wire. “To me, it’s, it’s really, it’s so simple, that life should be lived on the edge of life. You have to exercise rebellion, to refuse to tape yourself to rules, to refuse your own success, to refuse to repeat yourself, to see every day, every year, every, every idea as a, as a true challenge, and then you are going to live your life on a tightrope.”

At the end of The Walk, Petit is told that his performance gave the Twin Towers, which were not universally praised at the time, a soul. And while The Walk doesn’t get all the details right—if you look carefully, you’ll notice that in some of the posters, the Twin Towers are placed in between 30 Rockefeller Plaza and St. Patrick’s Cathedral—it manages to capture that great gift-giving.

From the Forum: Choosing an Oil Finish Over Polyurethane for New Floors

October 12, 2018 admin Comments Off on From the Forum: Choosing an Oil Finish Over Polyurethane for New Floors

December 28, 2018 admin Comments Off on Everything you need to know about getting around NYC this New Year’s weekend