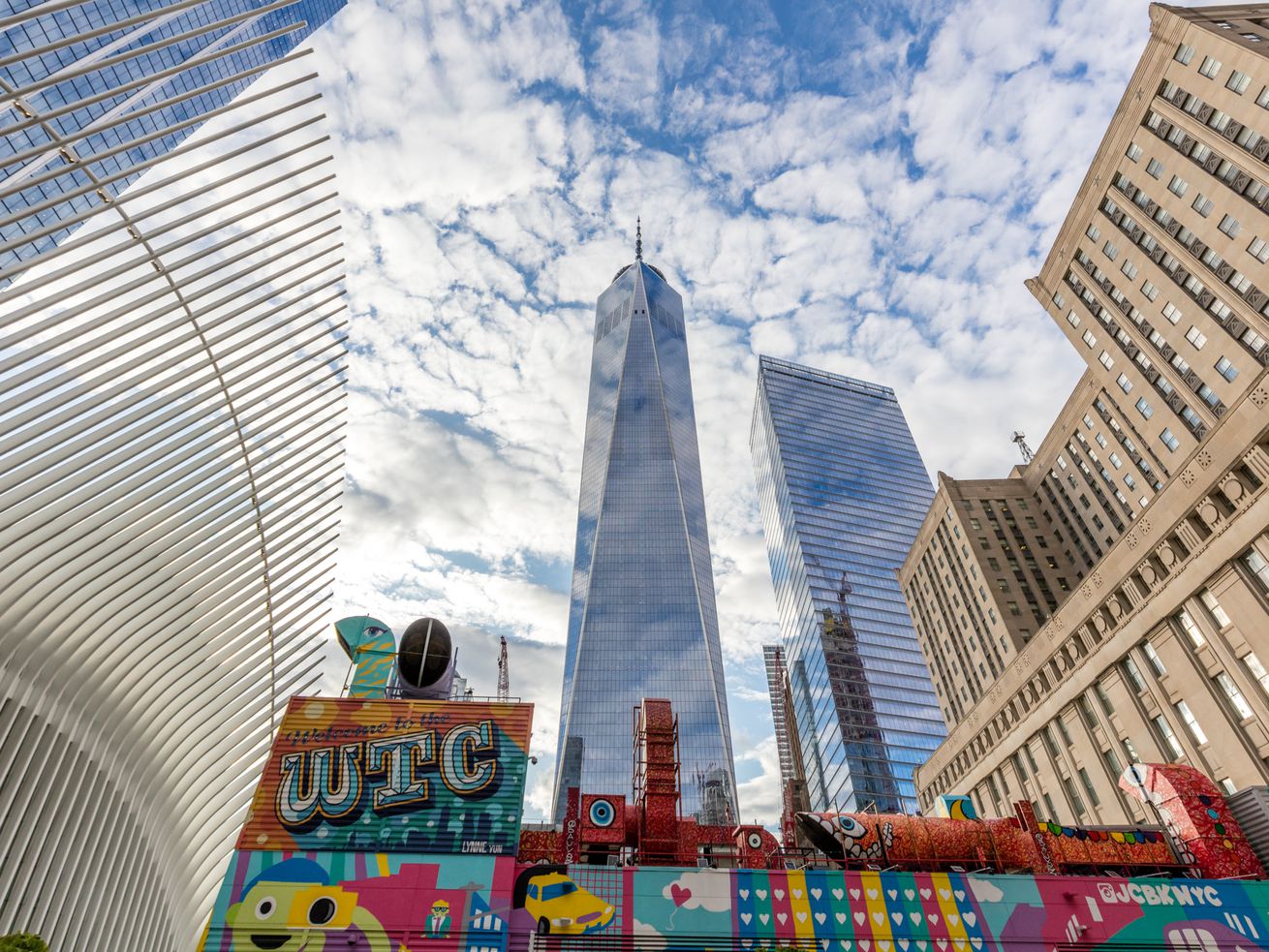 One World Trade Center, with the Oculus to the left.

On the 18th anniversary of 9/11, check in on the progress at the World Trade Center

Today marks 18 years since the terrorist attacks of September 11, 2001, during which thousands of New Yorkers lost their lives, and the area surrounding the Twin Towers was all but destroyed.

Though it’s been a long road back for Lower Manhattan, the nearly two decades since the attacks have been transformative. One World Trade Center, the centerpiece of the rebuilt complex, opened in 2014; since then, many other elements—including the 9/11 Memorial, a somber tribute to victims of the attack, and most of the skyscrapers planned for the historic WTC campus—have come to fruition. While the complex isn’t quite finished, and some parts are still up in the air, it’s getting closer and closer to completion.

Read on for a status report on the World Trade Center site, which has become the centerpiece of a booming Lower Manhattan.

The centerpiece of the new WTC stands 104 stories and 1,776 feet tall (including its somewhat controversial spire, which shines every night). Its design is the creation of Skidmore, Owings & Merrill’s David Childs. At the top of the building is One World Observatory, which opened in May 2015.

The building’s three million square feet of rentable space is around 85 percent leased, and Condé Nast is still its anchor tenant (though with not quite as much space as when the media giant first signed its lease back in 2011). Other tenants include Servcorp, the federal government’s General Services Administration, Moody’s, Ameriprise Financial, and Mic.

And for the first time since the building welcomed tenants in 2014, its lobby will be fully operational; a temporary loading dock is due to be removed sometime this year, opening the lobby’s eastern side up to the public.

Located at 200 Greenwich Street, 2 World Trade Center was initially going to be designed by Norman Foster. Then, after 21st Century Fox and News Corporation signed on as anchor tenants, the Foster designed was scrapped in favor of a boxy creation by Danish starchitect Bjarke Ingels. But in another twist, in 2016, Fox and News Corp. backed out of that deal, but the BIG design—calling for a 90-story tower standing 1,270 feet tall encompassing 2.8 million square feet—remains.

As of right now, the building is still due to rise, but the when will depend on snagging an anchor tenant for the skyscraper, which Silverstein Properties is still in the process of doing. In the meantime, several murals have been added to the site where the building will eventually stand. A lot adjacent to the site has also been used for outdoor programming, including an outpost of the Brooklyn bazaar Smorgasburg, and live performances.

Ten years after the official groundbreaking for 3 World Trade Center, the 80-story tower finally opened in June 2018. Manhattan’s fifth-tallest building (for now) encompasses 2.5 million square feet, with the first five floors given over to retail, though several planned restaurants abandoned plans to move into the skyscraper.

The building is currently around 60 percent leased, with GroupM serving as its anchor tenant. Other commercial tenants include consulting firm McKinsey, mattress company Casper, and stock exchange IEX. The design is by architect Richard Rogers of Rogers Stirk Harbour + Partners, and the building is home to what developer Silverstein Properties says is the world’s largest office terrace. As of this week, it also has direct access to the 11 subway lines at the WTC Transportation Hub.

This 72-story, 977-foot-tall building encompasses 2.3 million square feet, and was designed by Fumihiko Maki of the Tokyo-based architectural firm Maki & Associates. It opened in November of 2013, and was the first building in the historic 16-acre WTC complex to debut. Five years after it opened, the building is fully leased, with Spotify becoming the latest big tech company to make the move to the complex.

4WTC also connects to the WTC Transportation Hub and the shopping center within the Oculus, with retail tenants that include Eataly, Banana Republic, and H&M.

One of the final unfinished pieces of the World Trade Center site is finally on the road to wrapping up: Earlier this year, the Lower Manhattan Development Corporation and the Port Authority issued a request for proposals (RFP) for the site, which has been stalled since the former Deutsche Bank building was torn down in 2007.

According to the RFP, a developer could building more than 1 million square feet, which could be used for commercial space (offices, a hotel, convention center, and the like) or as a residential building. In either case, a new structure could rise up to 900 feet. It’s rumored that major developers—including Brookfield, Silverstein, Vornado, and Durst—are planning to throw their hats in the ring.

Located at 250 Greenwich Street, 7 World Trade Center sits on 1.5 acres of land just north of the historic 16-acre World Trade Center campus. The original 7WTC, completed in 1987 (and destroyed in the aftermath of 9/11), sat on the same site. The new structure stands 741 feet tall with a design by SOM’s David Childs. It was the first tower rebuilt after 9/11, opening in May 2006. Tenants that moved in recently include Zola, the wedding registry company, and Moët Hennessy.

The official memorial to the victims of the September 11 attacks debuted in two parts. The memorial itself, a large open-air plaza, opened on September 11, 2011. Since then, more than 48 million visitors have taken in its two waterfalls (known as “Reflecting Absence”) in the footprints of the fallen Twin Towers.

Earlier this year, another section, called the Memorial Glade, debuted. This new space is intended as a memorial to those who were part of the recovery effort, and have since died or otherwise been affected by 9/11-related illnesses. It features six enormous monoliths, weighing as much as 17 tons, that are meant to “symbolize strength and determination through adversity,” according to the 9/11 Memorial. It’s located at the corner of Liberty and West streets.

The museum was dedicated on May 16, 2014, and opened to the public five days later; nearly 16 million people have visited since then. It features artifacts such as tridents from the Twin Towers, fire trucks and an ambulance from 9/11, and the remains of the old WTC broadcast antenna. New artifacts added to its collection include the pens used by President Donald Trump and Speaker of the House Nancy Pelosi to sign the 9/11 victims compensation act into law earlier this year.

The site that will give eventually way to the erstwhile WTC PAC is located between One and 2 WTC. In 2016, philanthropist Ronald Perelman donated $75 million in exchange for the naming rights for the building. The new design, by REX, was unveiled the same year, and will contain three reconfigurable and combinable theaters and a café, where both performance attendees and the public will be encouraged to enter.

Construction is now underway on the venue, and while there is no set opening date right now, the Perelman will host its first performance in 2021, to commemorate the 20th anniversary of 9/11.

Two years after it opened, this 150-foot-tall winged creation, the work of Spanish architect Santiago Calatrava, has become a lower Manhattan landmark. The striking architectural piece is the topper for the larger WTC Transportation Hub, with a skylight that opens every September 11 as its centerpiece. Or at least, it’s supposed to; this year, the skylight will not open after a leak was discovered following last year’s ceremony.

It’s also home to the Westfield World Trade Center mall, which has 365,000 square feet of space for more than 100 retailers, including an Apple Store, Sephora, Kiehl’s, and other luxury brands. The total cost for all of this ended up being north of $4 billion.

Last year, the MTA unveiled the new subway stop at Cortlandt Street, now dubbed WTC Cortlandt, which sits within the footprint of the old 1 stop that was destroyed on 9/11. The new subway stop also features an installation by artist Ann Hamilton that incorporates text from the Declaration of Independence and the 1948 United Nations Universal Declaration of Human Rights.

The hub connects myriad transportation options in lower Manhattan, including the subway lines at Fulton Center, those at the World Trade Center, the PATH trains, and the ferry terminal in Battery Park City.

In addition to having greenery and plenty of seating, the park is also now home to Fritz Koenig’s Sphere, which was placed between the Twin Towers when they opened back in the 1970s. It was badly damaged on 9/11, and sat within Battery Park until 2017.

Located within Liberty Park, this church will replace the one of the same name destroyed when one of the Twin Towers collapsed on it on 9/11. However, when that will happen is currently up in the air: Construction stopped at the site in 2017 amid larger questions of financial solvency for the Greek Orthodox church. Both the Port Authority and Gov. Andrew Cuomo have expressed their support for getting the shrine finished, but right now, it looks much the same as it has for the past two years.

The new structure is the second Santiago Calatrava design at the World Trade Center, and has elements that echo the design of the Oculus.

April 26, 2019 admin Comments Off on Daily Links: Brookland Capital to Be Evicted From Bed Stuy Office Amid Financial Woes